Best Solutions for Your Projects

Jasionlight stadium LED screen has transformed many stadiums around the world with our world-class stadium LED display. The big screens in stadiums are a perfect way to market the products and services of your sponsors.

The Jasionlight sport LED display offers a clear visual display that attracts the audience making them consume the intended message.

Jasionlight’s experience in the LED industry is what makes it possible to offer the best stadium LED display. Our stadium LED screens are used in some of the best clubs in the world.

Jasionlight stadium advertising boards are manufactured by a team of experts. Our team of experts includes the research development personnel who are always working hard to come up with modern stadium screens. Jasionlight sport LED display has a long lifespan of up to 11 years.

The manufacturing process ensures that no stadium LED screen leaves the factory with any defects. Several tests are undertaken and the stadium screen is only released after qualification. Any product that may be reported to have a problem after release is recalled immediately for a replacement.

The special protection features are also meant to protect the stadium advertising boards from damage. It protects the big screen in stadiums from rain and damage caused when hit by the ball.

By buying Jasionlight stadium advertising boards, you are assured of a chance to use the stadium LED screen in any UEFA League.

Previous
Next
GET BEST QUOTE NOW

Why Should You Consider Investing In Jasionlight Stadium LED Screen?

Stadiums are not used every day throughout the year. Games and sports are seasonal. Jasionlight has all that in mind and that is why all our stadium LED screens are made to last more than 25 times longer compared to normal lightings. Jasionlight is always keen to ensure you get the most out of your stadium advertising boards.

A Modern way of Advertising

The Jasionlight big screens in stadiums have a very large viewing angle allowing the fans to see everything from any corner. Stadium LED screen is mounted around the pitch and with the additional large angle of viewing, all the advertisement content is visible. It helps you maximize the little space you have with maximum returns.

Jasionlight Versatility In Stadium LED Screen Manufacturing For All Stadiums

For all your stadium advertising needs

Games and sport have become a great part of our entertainment. The fans from different places want to enjoy games as if they are on the pitch. Jasionlight is providing enough marketing opportunities to create revenue from the large audience that follows the matches either live or on TV. Some of these solutions include: 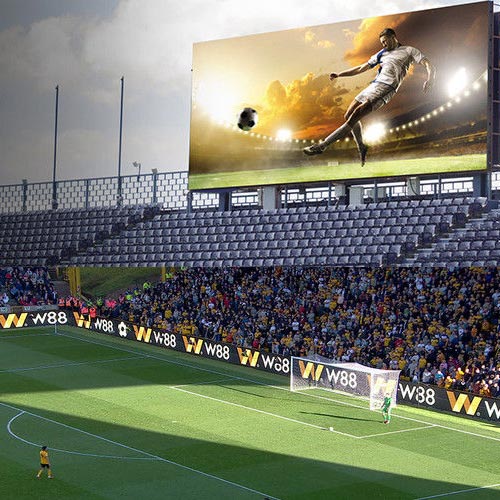 Use a football perimeter LED screen for all your advertising needs inside the stadium. Jasionlight football perimeter screen makes sure that your investors get the value for their money. The lighting attracts the attention of all the fans. 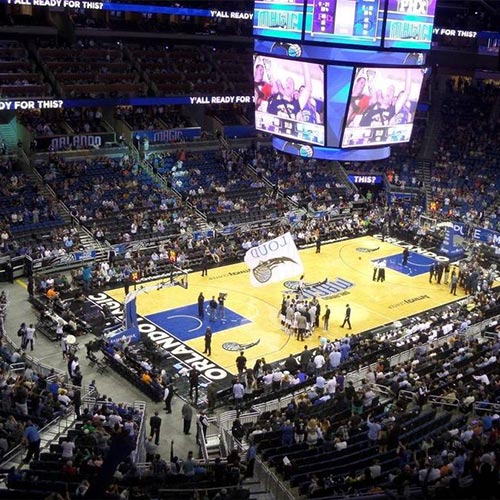 The Jasionlight LED perimeter boards have enough viewing angle that allows any fan from any corner to view the advertisements. The sponsored advertisements are a huge way of making money as well as paying off the club investors.

The Jasionlight Outdoor Perimeter LED Display is mostly used in courts to display the scores as well as the timing. It can also be used to display some commercial contents as well as replaying the highlights of the game. It is very light and durable due to the protective features in place.

Jasionlight has brought you indoor perimeter screens to offer you more opportunities to market and generate more revenue. The Jasionlight indoor LED screen allows the stadium to interact with the fans. This increases your broadcasting opportunities.

Jasionlight scoreboard screen is used in many different environments. They are lightweight, easy to install and maintain. Jasionlight Scoreboard display and screen provides an opportunity to make more money since they are essential for games and sports.

Jasionlight provides stadiums with curved led screens to use in different environments as they may prefer. Jasionlight stadium curved ribbon screens relay information in real-time. They can also live stream Twitter feeds to engage the fans even more.

Why Do You Need To Work With Jasionlight In Coming Up With A Good Advertising Stadium LED Screen?

Jasionlight is a reputable company that has gotten the confidence of different clubs in providing durable, strong and easy to install stadium LED screen. Through a strong team of LED experts, it has become quite easy and affordable to come up with LED solutions that are both affordable and sustainable.

By getting an affordable stadium LED screen from Jasionlight, you are assured of high revenues due to the low costs of maintenance and low power consumption.  All our stadium LED screens are made following the regulations of different bodies that govern the sports and games. This includes the UEFA where we have been privileged to have our products in use.

Jasionlight is the best stadium LED screen manufacturer that you should work with. Engage with us for details on how this can be achieved. You can call us now or simply write an email and our team will immediately get in touch with you.

1. What is a Stadium LED screen?

A Stadium LED screen is a specific type of LED screen mainly used in stadiums, large outdoor sporting venues. Stadiums are where top-level competitions, both national and international, are showcased. With the number of people who often come to these venues, a giant monitor is essential.

Stadium LED screens are a specific type of giant monitor used for this, using LED or light-emitting diodes. This particular type of screen is ideal for stadium use as it provides:

2. What is the difference between Giant LED screens and Stadium LED screens?

3. How does a Stadium LED screen work?

This is possible through the special LED screen control system software used to operate the screen content. With this software, you can upload, broadcast, display, and basically control anything shown on the LED screen via the administration panel.

4. How much does a Stadium LED screen cost?

5. What are the different types of Stadium LED screens?

There are essentially three types of LED screens used in stadiums, namely:

6. What are the classifications of Stadium LED screens based on the installation environment?

The Football Field LED Display is installed mostly around football fields, of course. It’s mainly the type used for advertisements. The Funnel-shaped LED Display is usually installed at the top part of indoor stadiums called “sky.” It’s used to show scores, introduce athletes, display the progress of the game, etc.

On the other hand, the Stadium Wall LED Display is often installed on one of the gymnasium walls for synchronizing events. It is also usually used to display event information in real-time. Lastly, there’s the Outdoor Column LED Display for outside the gym or arena. Since it’s outdoors, it needs features that can handle the elements.

7. Where are Stadium LED screens used?

As the name suggests, Stadium LED Screens are used in stadiums. But to be exact, this giant LED screen is used in sports facilities, both outdoors and indoors. That means you can also install it in arenas, gymnasiums, basketball courts, golf courses, pools, rinks, football fields, even airports, and docks.

8. What is the lifespan of Stadium LED screens?

9. What are the benefits of Stadium LED screens?

There are many benefits to the use of Stadium LED screens which include:

The other benefits of LED screens used in stadiums are:

10. What are the best features of Stadium LED screens?

The best features of Stadium LED screens include:

11. What is the refresh rate frequency of Stadium LED screens?

12. What is the difference between standard LED displays and Stadium LED screens?

13. What are the requirements for LED screens in Stadium?

There are a few things to consider before installing giant LED screens in a stadium, which are:

The goal is for over 95% of the audience on the Stadium’s formal fixed seats to meet the required maximum visual distance. This must be considered when choosing where to install the screen and the number of Stadium LED screens to be installed. Similarly, the distance of the screen show allows the athletes, coaches, and referees to see the displayed content clearly.

There are reliability standards to Stadium LED screens that must be met. When renting, customizing, or buying an LED screen for the Stadium, ensure that the display screen’s reliability meets these requirements.

There are also safety standards that your Stadium LED screen must meet. Also, it has to be powered separately. If it contains polymer materials, you must ensure that they are flame retardants. Other safety features the display must have include:

The Stadium LED screen’s control must have the ability to allow the operators to control it from displaying content via scrolling, turning pages, switching manually and automatically, and more. It should also have text and pictures, live images, animation, and graphics and video display functions.

The network interface must have an IEEE802.3 Ethernet interface. Moreover, it has to assemble multiple data interfaces, connect to the time scoring system and receive data. Stadium LED screens with graphic and video display functions must have a video interface.

In terms of electrical performance, a Stadium LED screen must have:

For the display characters, keep in mind the following requirements:

With other venues, you can use the above requirements as a reference. On the other hand, the buyer and supplier agree on the installation structures based on the actual function and use as indicated in the contract.

The appearance and structure of the Stadium LED screen are based on specific industry standards, as listed below.

If the Stadium LED display is installed in a corroded environment, anti-corrosion measures must be in place.

14. How do you choose a suitable LED screen for Stadium?

There are at least three things to keep in mind when choosing a suitable LED screen for a stadium. These are:

The flatness of the Stadium LED display is essential to ensure it will not result in a distorted image. If the screen is uneven, it will cause a blind angle when you play a video on display.

Outdoor LED screens used in stadiums generally must reach 4500 cd/m2 or more to make sure the display works fine. If not, the content displayed on the LED screen will have insufficient brightness.

If the ratio of the primary colors, which is red, green, and blue to 1:4.6:0.16, deviates even the slightest, it will result in a changed white balance. When that happens, the Stadium LED screen’s display quality is also affected.

Consider these three when you look for an LED screen for a stadium. They will help you pick one that suits the specific environment where you will be installing the display.

You will find out if Stadium LED screens are a good investment by taking a closer look at their pros and cons.

LED screens for stadiums are useful marketing devices. They are manageable, low cost, and have a long lifetime. LEDs, however, use more energy compared to LCD. Also, the engineering it needs must be high quality, or it will have many defects.

If you think the benefits outweigh the disadvantages of Stadium LED screens based on your situation, it is a good investment.

I’m Here
To Assist You